The United Kingdom is like party-blower drooping down. Storm clouds are constantly rumbling over the country, both literally and metaphorically. This is eloquently backed by the words of arguably one of the most passionate spoken and written word artists in all contemporary Britain.

These are just some of the sensations one experiences upon watching “People’s Faces”, one of the numerous vocal masterpieces devised by spoken-word performer and songwriter Kae Tempest in their 2019 album The Book of Traps and Lessons.

In many ways, this song is analogous to Tempest’s artistic technique itself.

It is powerful. It speaks of a country simultaneously divided and united; one in which we are all “one and the same flesh” yet is never possible to see past the “rampant divisions between the oppressor and oppressed”.

It is diverse. Shifting between poetry, rap, pure song and raw spoken word, its structure and experimentation interweave with one another to display Tempest’s sheer skill as an artist of words.

But most of all, it is underrated. It deserves far more attention than it has currently been receiving, and with this piece, I intend to give both them and their music some of the recognition they undoubtedly deserve.

The year 2019 was a year just as politically turbulent as any other in contemporary Britain. Ongoing debates over the cataclysmic change called “Brexit”, an intense general election, followed by a world-changing pandemic. It’s really no wonder that many people, like Tempest, anxiously feel as though their country is constantly on the verge of collapsing; or, as Tempest deftly put it - “my country’s coming apart”.

Nihilistically describing “the whole thing” as a “bumbling farce”, they are undoubtedly referring to the messy and shifty way in which politics are generally conducted in. All this leaves people in a state of uncertainty or as Tempest puts it, in the “rumbling dark”.

Throughout the first verse, they categorically list all the issues our society face - the “mirages” and “pretences”, the “fragile wages”, the “extortionate rents” and perhaps the most relatable of all - “We're working every dread day that is given us/ Feeling like any minute now, the struggle's going to finish us”.

Now one could write an entire dissertation on analysing the masterful ways in which Tempest portrays numerous political topics. From rampant class divisions to the human condition as a whole. However, I’ll keep what I have to say here concise by highlighting some of the most wondrous aspects of the song for me.

My favourite moment in the entire song is when Tempest, in the second verse, quite literally states the obvious. “There are no new beginnings” they say, “until everybody sees that the old ways need to end”. This line, accompanied by the animation of a snake spiralling into the shape of infinity and eating its own tale, symbolises the infinite self-destructive cycle of such “old ways”. Despite how relatively straightforward the statement was, it was one of those lines to make me stop the track and reflect.

One could easily apply this concept to our current political situation, attributing it to the destructive, archaic social views many still seem to maintain in regard to race or gender- with the JK Rowling controversy being one such example. Such limiting, fixed perspectives on people from different backgrounds is the major drawback in our advancement- they prevent the “new beginnings”.

The animation is also stunning, simple yet simultaneously rich in metaphorical meaning. It isn’t too often that a musician accompanies their piece with animated segments to back them. However, the animation in the Streatham Version of ‘People’s Faces’ seems only to work in conjunction with the lyrics since it helps stress Tempest’s key message with the song.

It’s animated using only two chalk-like, opposing colours – black and white. The binary colours of “the goodies” vs “the baddies”. The colours of black-and-white thinking; the idea that there is an "us" which has to oppose a "them". Many in political rhetoric have always appeared to harp upon this concept that their own opponent is the "them" in question, in order to twist people into siding with them and utterly dismissing the opposition as the “wrong side”.

A great modern-day example can be seen in the many political commentaries on Brexit; by the simple twisting around of language and labelling certain people as "Gammons" or "Remoaners", set-minded opinions are ingrained into our mindsets which outright ridicule and dismiss any opposing view others may have instead of considering them. I think it goes without saying that this narrow-mindedness in politics is destructive in its own right, and through the usage of the very colouring of the video, Tempest subtly draws attention to such harmful notions.

However, in my view, the effect of this colouring isn’t only just an entirely pessimistic commentary on the set-minded nature of politics inasmuch as the song itself isn’t just a rebuke of the divisive political situation which has, in a sense, always been present in the UK.

Despite all of this darkness, all this uncertainty, tension and division, even when they are “weak” and “breaking”, Tempest still finds comfort in “people’s faces”. A reminder that we are all human at the end of the day. We are all of “the same flesh” and it is this inherent humanity that unites everyone in spite of whatever political differences may come between us.

It allows them to find “peace”; and ultimately saves their “sanity”. It is this very idea that banishes the pitch-black storm clouds from the sky to uncover the pure pasty whiteness, a symbol of the small comfort that lies beneath it all.

Tempest somewhat optimistically rounds off by saying “I love people's faces”-so should all of us. 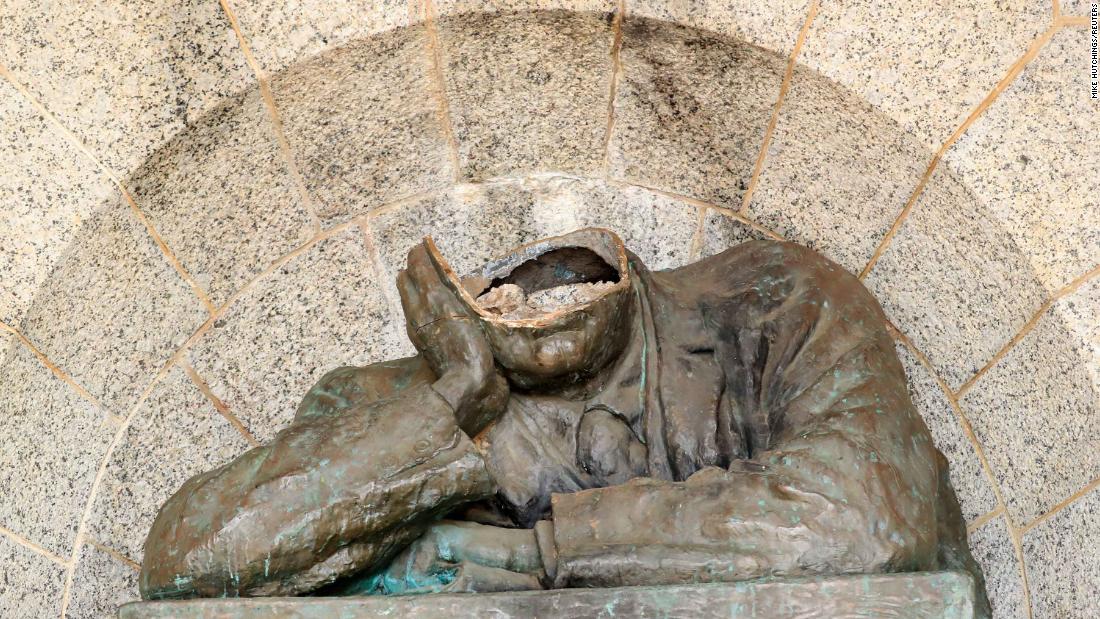 "In our daily lives, we see colonisers and plantation-owners immortalised in bronze statues and street names. Why do we allow this to continue?" Caitlin, 16, explores the controversial topic of iconoclasm.

‘’How many people vote a certain way because their parent told them to? What seems to be the deciding factor for most? Environment or ideology?’’ Laurie Freeman ,19, explores the factors influencing our political standpoints.